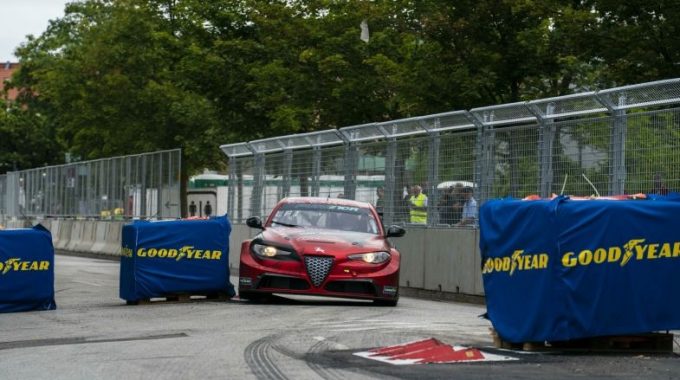 Luca Filippi edged out Mattias Ekström by just over a tenth of a second to claim victory in the Super Final in Copenhagen following a sensational drag to the line.

The Romeo Ferraris Alfa Romeo driver started second on the grid and held that position behind polesitter Ekström for the majority of the race before making a superb side-drafting pass on the Swede as the pair charged to the finish line.

Front-row starters Ekström and Filippi got even starts as the gates lifted and briefy made contact on the run into the first corner.

Ekström emerged in front on exit as Filippi withstood an attack from Vernay into Turn 2 – and a front-left lock-up near the end of the lap – to maintain his second place.

Ekström, though in charge, could only build a margin of half a second over Filippi at half-distance with Filippi looking more in his mirrors than at the Cupra in front of him.

The order looked like remaining unchanged on the final lap but Ekström didn’t get as much momentum out of the final chicane as he had done in the previous laps, which allowed Filippi to draw up alongside the Cupra on the run towards the flag.

Filippi brushed alongside the Cupra and the concrete wall to grab the victory by just over a tenth of a second.

“I was right on Mattias’s bumper all race, it was a tough battle but it was I think respectful, so I loved it!” said Filippi, who ended the weekend as the top Pool A points scorer with 66, two ahead of Ekström.

“We have had a fantastic car all weekend. I thought ‘okay, it’s my last chance’, I took the kerbs like I never did before and I took a chance. And then, I went for it and when I put my nose in I said ‘I’m not going to lift’.”