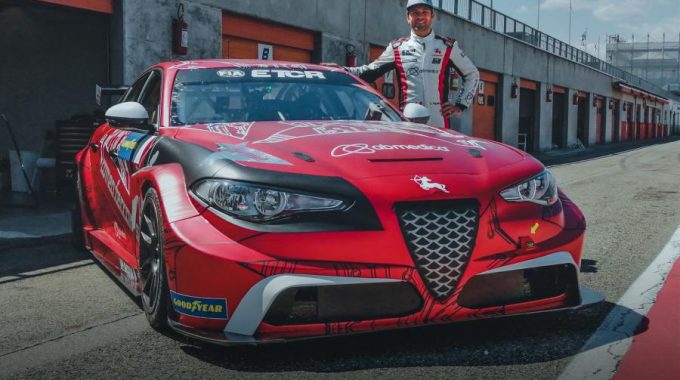 Romeo Ferraris and Luca Filippi will continue their partnership in the FIA ETCR, whose 2022 edition will start on the weekend of 7-8 May on the Pau urban track. The 36-year-old Italian is the second confirmed driver of the Giulia ETCR for the next season of the Electric Touring Championship, now officially sanctioned by the International Automobile Federation, after the Belgian Maxime Martin.

The bond between Filippi and the manufacturer of Opera was established in 2020, with the participation in four rounds of the FIA WTCR World Championship at the wheel of the Alfa Romeo Giulietta Veloce TCR by Romeo Ferraris lined up by Team Mulsanne. In 2021, the multifaceted driver from Mondovì was involved in the ETCR program, finishing seventh in the overall standings with 218 total points, and with the second place overall in the Copenhagen round as his best result.

Filippi made his contribution to the Romeo Ferraris Giulia ETCR project not only on the track but also by making available his significant previous experience in electric motorsport, having contested the 2017-2018 edition of Formula E and having been a tester in the category.

The commitment to the PURE ETCR, now evolved into FIA ETCR, was added to a curriculum including the 2005 Formula 3000 Italy title, the adventure in GP2 (2009-2010 runner-up in the Asia Series and 2011 in the Main Series), the role of official Honda test driver in Formula 1, appearances in IndyCar in America and participation in GT and Touring races.

“I am really excited to remain linked to Romeo Ferraris to renew the challenge in the FIA ETCR championship, after the positive experience of last year in an innovative and fascinating world. We were immediately able to show the potential of the Giulia ETCR project, and for the 2022 season we are aiming for even more important results. We will fight against very competitive opponents, but in addition to an excellent technical basis, I know I can count on a working group with which I felt at ease right from the start. It will be a pleasure to continue together with Michela Cerruti , Mario Ferraris and the rest of the team”.

“Luca has become part of the family in our team, thanks to his talent and experience, which need no introduction, but above all for the human relationship that has been created in almost two years of collaboration. Hence I am very happy to have him again in our squad of drivers for the FIA ETCR, with a clear common goal: to put to good use what we have learned in the past season and to fight at the top in every round, to highlight ourselves in this fast-growing championship”.

Join me on VERO True Social

Download this innovative Social App! Here you can find my favourite films, music and books.…