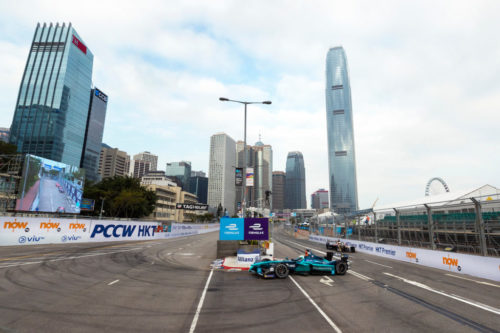 Luca Filippi (Car #68)
“There was a lot going on in race one right from the start and we had very good pace. I had a drive through penalty and lost some time there and this is why we were not higher up in the points. But for the rest we had a strong car, strong pace and showed that we have potential, so that at least is very promising.
The second race was potentially good; unfortunately, I got hit on the very first lap and the front suspension was bent, so obviously I was compromised and we had to change it. After that we just gained as much experience as we could by finishing the race. It’s a shame as it could have been another points finish for us with two cars, but on to Marrakesh.”

Gérry Hughes, Team Principal
“Luca coming in and finishing with one point in the end of his first E-Prix was very pleasing for him and good for the team […] Qualifying for round two brought a much more solid performance from both drivers, lining up on the grid in eighth and ninth positions. That was a great place to start, but unfortunately Luca got involved in a racing incident in the opening lap which took him out of the running, but we decided to keep going on the basis that it would be good experience for him. […] I’m glad we had the opportunity of coming back today and going through it all over again and now we’ll go away, reflect on our experiences from Hong Kong and put our best foot forward for Marrakesh.”

Romeo Ferraris and Luca Filippi will continue their partnership in the FIA ETCR, whose 2022…